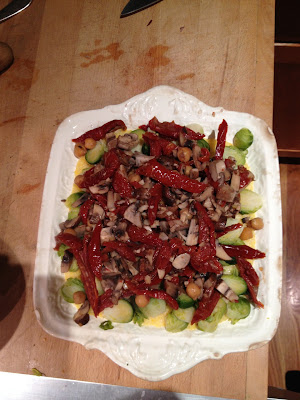 It is wonderful to imagine a meal and then try to construct it. I had never made polenta from scratch before, and had a vision of a sun dried tomato concoction atop a platform of polenta. So I bought sun dried tomatoes from my food coop (www.foodcoop.com). They are imported from Italy and come dried with salt, not in olive oil. I began by soaking about 20 tomatoes, cut into long strips, in a wide saucepan with probably two cups of water. The water became pretty salty, but I added cremini mushrooms, (about 2.5 cups) to that, cut in quarters and simmered it for a while. This is when I added about a half a cup to 2/3 of a cup of plain organic canned chick peas. The water turned into an amazing broth, and I poured a good bit of it off to save for later, adding more fresh water so that it wouldn't be so salty, but still had time to deepen the flavors. 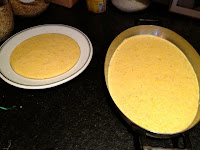 Then I let that sit and made the polenta, boiling about 4 cups of lightly salted water and then slowing pouring in not quite a cup of coarse stone ground corn meal, whisking it as I poured. It took about 15 minutes of stirring and simmering for this to turn into a heavy glop, thickening and looking as though the corn meal had totally softened. I poured that out into a flat dish and let it cool. It was about 3/4 of an inch thick and maybe 9 inches square. 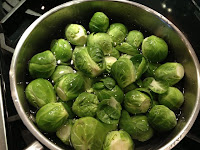 Then I boiled up the brussels sprouts until they were soft.

That's all the parts. Final construction was 10 minutes in a 400F oven for the polenta, then putting the Brussels sprouts over that in the oven for another 5 minutes so they got a little hotter and crisped up a bit. Finally I spread the tomato/mushroom/chick peas over the top with the juice from the pan. (I used the reserved broth in a mushroom soup the next day. Recipe to come on that.) 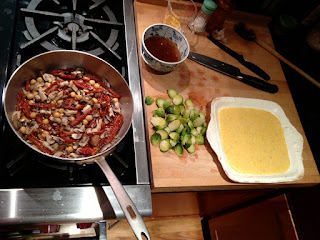 The second time I made this dish, I was cooking for 4 people instead of two. I made more polenta, 6 cups of water and 1.25 cup of corn meal so that it would be thicker (a full inch thick) and there would be leftover for the next day's lunch. I used a big pile of mushrooms, maybe 5 cups, and did not add in enough more sun dried tomatoes to have the same flavor impact. I'm going to try it a third time in another week or so and see if I can get the proportions right. My goodness it's good anyway!
Totally estimated nutrition facts: serving 325 g polenta & 250 g topping offers around 200 calories, 3 g fat, 186 g sodium, 37 g carbs, 9 g fiber, 13 g sugar, 14 g protein, 3% vita A, 126% C, 7% Calcium, 20% iron (RDAs) sourced through cronometer.com  Remember, the thickness of the polenta and the quantities of each ingredient will change these numbers. All in all, a great no meat, no dairy, no oil, whole grain, vegetable main dish! 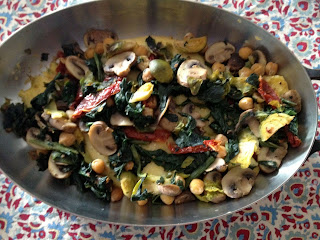 And then there's the leftover recycled for Sunday lunch by adding regular sliced mushrooms, a couple more slivered sun dried tomatoes and what was left of a bag of organic frozen spinach.  Delicious. We even extended a bit of leftover salad with some chopped red leaf lettuce and the leftover lemon green beans!