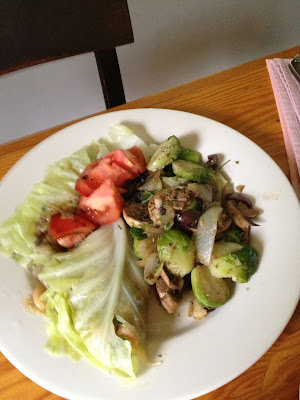 When the asparagus begins to come in it seems that it appears at every meal for a while. I had been thinking about cabbage rolls, but the weather turned cooler for a spring day and a hot meal felt right. So the asparagus went together with the leftover cannelloni beans and tang of tomatillos, not a common combination but delicious. Then the cold temperatures prompted me to impulse-buy Brussels sprouts, and so the sauté evolved to round out the plate. 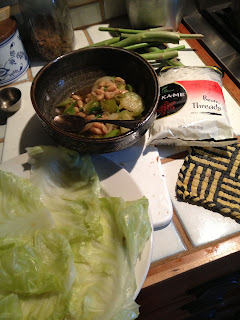 1. Start by steaming the cabbage leaves and set them aside. Don't worry if they aren't intact, you can use 2-3 for each serving to form an informal wrap. This is not finger food after all is said and done. You can soak the bean threads in the cabbage leaf water OR you can use the Brussels sprouts steaming water (I used the same water for everything). After the bean threads soften, put them in a strainer and run cool water on them to keep them separated. They will heat again when you throw them all together in the next step.
2. In a good sized sauté pan, put asparagus, garlic, beans, and sliced tomatillos with a little water and the Bragg's Liquid Aminos, cover and steam (about 6 minutes). Add the bean threads and stir all together.
3. Lay out overlapping leaves, fill with veggies, and gently roll up, pouring any pan sauce over them. This could also have some heat if you add some red pepper flakes. 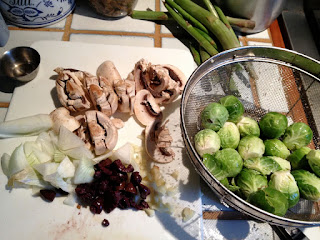 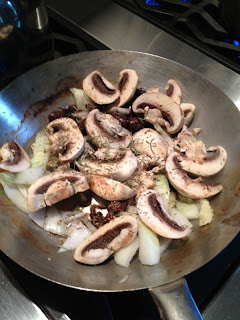 1. Lightly steam the cut Brussels sprouts in the cabbage water.
2. Saute the sliced mushrooms, garlic and onions in a bit of water with the thyme and rosemary and salt.
3. Combine the Sprouts into the saute, adding the black olives chopped into big pieces.
4. Stir together and add salt and pepper as desired.

SERVE -- with some rough chopped fresh tomatoes drizzled with Balsamic Vinegar ... What a beautiful quick meal!

Emmer wheat turns out to be farro and my local food coop found a relatively local source! So I couldn't resist trying this early simple form of wheat, ground into fine flour. I am not willing to accept that I must always have the flavor of brown rice flour in everything I bake. So these are not gluten free, but they are still whole grain and no oil! I wanted something hearty, full flavored, textured and with the sweetness of raisins for my darling who loves raisins. The best ideas sometimes come at the last minute... adding the crunch and depth of sunflower seeds to the muffins just as I put them in the oven! 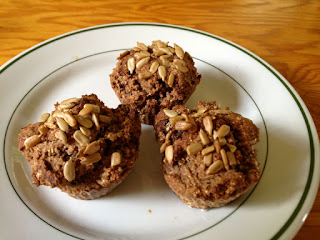 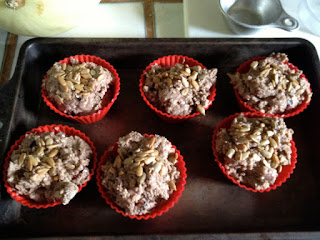 1. Mix all the dry ingredients in the larger of two bowls. Mix all the wet stuff in the second bowl (the jam gave this a lovely color and flavor undercurrent). Save out the raisins and sunflower seeds.
2. Add raisins as you mix the wet into the dry.  Fill 6 silicone muffin cups placed on a baking sheet. Cover the tops with sunflower seeds!
3. Bake at 375F 45 minutes.

Sunflower Raisin Buckwheat Muffins makes 6
Nutrition Facts
* Percent Daily Values are based on a 2,000 calorie diet. Your daily values may be higher or lower depending on your calories needs.courtesy of cronometer.com using my data.
Posted by Sarah at 5:06 PM No comments: 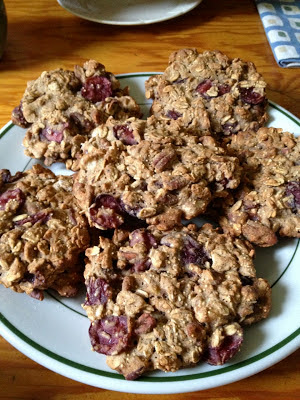 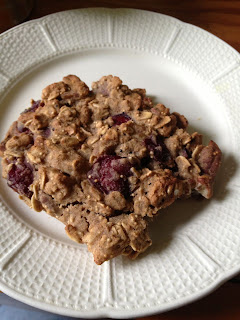 Fresh cherries inspired this crunchy, nearly energy-bar cookie-like breakfast treat. It has puffed kamut in it, but you could use puffed rice. The oats, amaranth and pecans all give textural and flavorful variety in each bite. I can't say enough about the silicone baking surface!

1. Mix together all the dry ingredients in larger bowl of 2 bowls. Mash the banana with maple syrup and almond milk in the other bowl. COMBINE WET INTO DRY, then add cherries and gently mix.
2. Place on silicone baking sheet on top of a cookie sheet in large blobs 2-3" across, flattened slightly.
3. Bake longer than you think -- about 35-40 minutes -- at 350-375F. Crisp on the top! Crunchy! Good later too...

(I'm going to try these with Ranier Cherries too!) 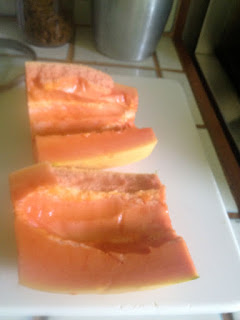 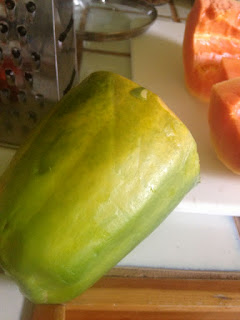 My husband couldn't resist a large "green" papaya for $1.25 at the grocery store. This was directly influenced by our recent viewing of the movie The Scent of the Green Papaya (see Roger Ebert's review of this 1994 Vietnamese/French film). As it turned out it was not a green papaya but a Red Caribbean! Right away I felt liberated to make a papaya salad that did not have to try to emulate the amazing green papaya salads of Vietnam... Since I had been craving black eyed peas, and had a few limes on hand, a framework quickly turned into a new summer favorite. Here's what happened. 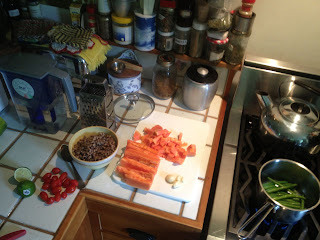 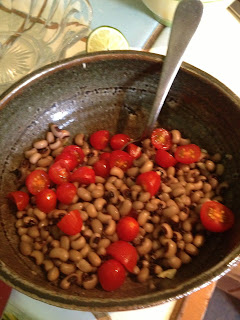 1. Prepare the papaya by cutting in half, peeling, slicing lengthwise, scooping out seeds, slice and then chop. Don't worry about everything being the same size, just think abouta  nice bite size.
2. Steam the green beans, rinse in cold water and chop into 1/2 inch pieces. Set aside.
3. Cook the black eyed peas in a good amount of water, about 25 minutes, with just a little salt. While these are cooking, you can crush and chop the garlic and chop the onion. Drain and add the chopped onion and garlic to this, and cutting the grape tomatoes in half and stirring them into the warm beans.  Let this cool to room temp or put it in the fridge. 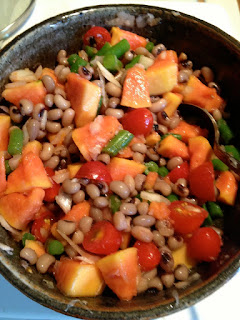 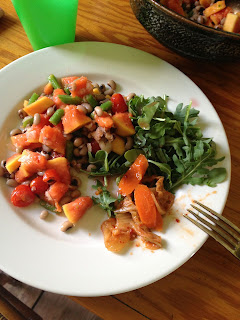 4. Construct: Add papaya chunks and green beans to the black eyed peas mixture. Add salt, a dash of red pepper flakes if you want heat, and the juice of at least half the lime or possibly the WHOLE lime! Set in the fridge for a bit if you want it cool or eat at room temperature. SERVE on a bed of baby arugula. Great for picnics. Can be eaten as leftovers the next day.

This was a meal prepared in advance for a cool supper on a hot day. I steamed the root veggies ahead of time and cooked the quinoa til nearly done, leaving it in the pan with the lid on for the afternoon! The key to this combination was that each dish had a distinct texture, flavor and sauce. I used Bragg's Liquid Aminos in cooking the quinoa with garlic, splashed just a bit of Ume Plum Vinegar on the asparagus, and made a quick peanut sauce for the roots. It was fast, fun, filling, easy and tasty.

a handful of baby carrots, you could use chopped regular ones
two parsnips cut in diagonal slabs
3 golden beets cooked in quarters
a good sized "japanese" sweet potato - or white yam in chunks

a good handful of fresh asparagus, cut into 2-3 inch pieces
about 12-15 grape tomatoes cut in half lengthwise
1-2 tsp Ume Plum Vinegar (splash on before taking out of pan)

1) Scrub, peel, cut and organize your vegetables. Steam the roots in a pot with a steamer insert and you can use the cooking water to make the quinoa (a nice subtle flavor sharing). The key is to get the chunks about the same relative to the soft or hardness of the root -- so that a hard root that would need longer cooking needs to be a smaller chunk relative to a soft root that cooks faster ... parsnips and carrots cook fast relative to beets and sweet potatoes. You can add other roots!
2) Cook the quinoa with the garlic and onion and the Bragg's until it's nearly done, then turn off and leave covered til you need it. I used it at room temperature.
3) Last thing is to cook the asparagus in a little water, covered. Cut up the tomatoes while the asparagus cooks. Stir it a couple times to be sure it cooks evenly. Add the vinegar (or squirt lemon on it if you don't like vinegar) while still in the pan. Add the tomatoes while the asparagus is still warm, stirring into the cooking juices with vinegar.