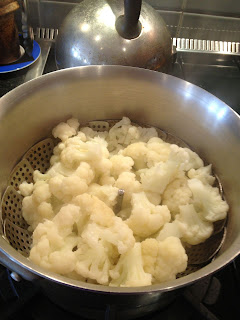 There comes a time when that half a can of coconut milk in the fridge just has to get used or it starts to go bad. I had been thinking about the fact that it had actually been a long time since we had rice with anything, and the idea began with the thought of putting coconut milk in rice. Pretty soon that morphed into this cauliflower curry with coconut milk and whatever coconut milk was left could go in the rice. I decided to mix the traditional dal (pureed lentils) into the dish, so that the whole thing would have curry flavor and be poured right over the rice, which began to take on its own shape. Portion nutrition is based on 4 large servings. Of course you can stretch this to feed 6 by adding a side dish (I'm thinking green beans...). You can also add heat (peppers) or sweet (peaches or tomatoes) or heft (potato, sweet or otherwise!) 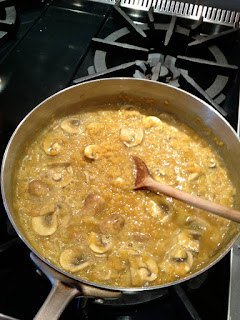 FOR THE RICE
1 cup brown basmati rice
1.5 cups water  (I used the water from steaming the cauliflower) 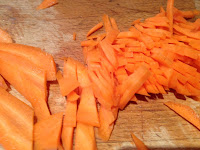 1. Wash and cut up the cauliflower and steam the florets in a large pot until they are cooked but not at all mushy. You can use the leftover water for making the rice.
2. Cook the red lentils - put lentils in a medium small pot, add the water and the 1/8 tsp tumeric, cook until totally soft so that you can whisk this and it will get all creamy. Cover and let it sit.
2. Chop the onion and slice the mushrooms, grate the ginger, and put this in a wide saute pan with the 1/2 cup water. This needs to be big enough to hold the whole curry. Add the herbs and the salt and the 1/2 tsp tumeric. Cook stirring occasionally until the onion softens and the mushrooms are nearly cooked. 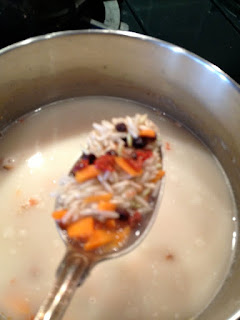 3. Cook the rice: Put the rice, water, carrot, tomato, coconut milk, currants and bring to a boil. Turn down immediately to simmer without a lid until most of the liquid is absorbed. Stir once, cover and let sit.  If the sun dried tomatoes are cured with salt - rather than soaked in oil - you do not need to salt the rice.  Otherwise, you can add salt and pepper if you like it that way when you fluff it up to serve it. 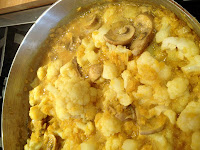 4. Add the lentils, and half the coconut milk, stirring. Add the cauliflower and simmer covered for about 10 minutes.  Serve spooned over rice, with a decorative bunch of cilantro or parsley leaves. 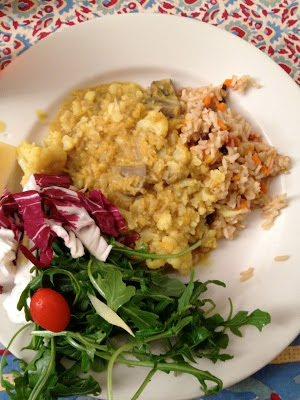